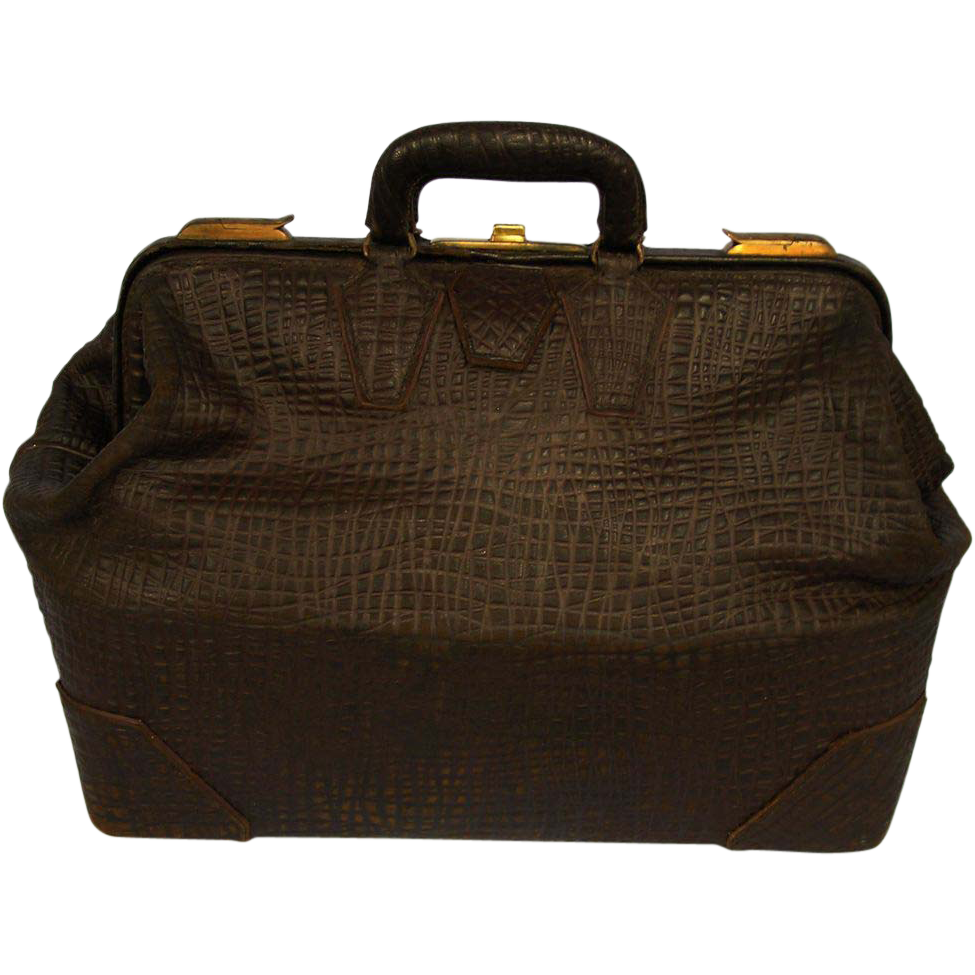 There is a fascinating Belber bag in one of our cabinets, with “Kate Potts” engraved on the closure hardware. It was donated by a community member, who also brought in the death certificate for the lady owner. Catherine “Kate” Scudder Cook was born in 1854 in New Jersey. She married George Potts circa 1878 after his first wife, Rose Leaf, died in 1877, with surviving children Henry, Leonard, and Charles-Raymond. They were the parents of Edith Potts, 1889-1978, who married William M Pomeroy in June 1917.  Mrs. Potts died June 4th, 1916 of liver cancer. Her grandson William Jr (1919-2006) married Cornelia Tuttle MacKnight, and they had William, Nancy, Elizabeth, and Peggy.

The bag was likely purchased after 1891 if we assume that she was traveling more when in her prime.  Belber began as a basement enterprise in 1891, with brothers Henry and Aaron Belber. They opened a factory in 1903. (Belber.com, accessed 5/7/2017) While, according to the company in consultation, no catalogs have survived from before the first World War, some newspapers have been saved and scanned for access. In June 1916, Belber bags similar ours are advertised at $3.50 to $25. In 1919, a Walrus bag similar to ours but leather lined was on sale for $20. (Altoona Times, 6/7/1916, and Pittsburgh Post-Gazette, 9/3/1919). In 1921, a non-customized walrus bag retailed for $35, and Belber cowhide was $50. (Pittsburgh Daily post, 4/5/1921) Let us assume that with the engraving, silk lining (not leather!), and higher grade Walrus leather, she was at the higher end of the price range.

Using measuringworth.com to calculate the purchasing power, Mrs. Potts would have paid $16.55 in 1891 to have a bag worth $20 in 1916. In 2017, that price increases in equal purchasing power to $445, taking inflation into account. The sole comparable item on the modern Belber website, which does not operate any storefronts, is a Doctor bag, with an added zipper compartment listing for $1350 in one of three colors. Kate’s specific product is no longer produced, probably has not been since the mid-1920s, and cannot be accurately valued. Price and value can change dramatically as there is no strict comparison and for a late 1800’s bag condition is key.  It is fascinating to imagine Mrs. Potts traveling with the bag, in an age when women wore much more clothing than today and air conditioning was not widespread. It is interesting to try to imagine what did she carry in the bag?

Belber is a heritage American leather goods company founded in Philadelphia in 1891.