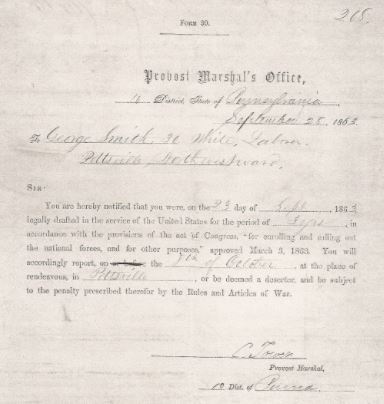 This collection is comprised of records, reminiscences, photographs, and a scrapbook relating to the Civil War and the Spanish-American War collected by the Pottstown Historical Society.
The Civil War records in this collection originate from Captain Benjamin M. Guest of the 68th Regiment Pennsylvania Volunteers, Company H. These records include muster rolls, clothing accounts, invoices, descriptive lists, and photographs, all dating from 1862 to 1865. There are also two volumes of “Personal War Sketches” from Pottstown posts of the Grand Army of the Republic, recording Civil War veterans’ reminiscences. The books were created about 1890 by members of the Grand Army of the Republic fraternal organization at Graham Post #106 (Pottstown, Pa.) and M. Edgar Richards Post #595 (Pottstown, Pa.). Both volumes are indexed.
This collection also includes photographs and a scrapbook from the Spanish-American War. Two captioned photograph albums depict the 4th Regiment of Pennsylvania Volunteers, Company M, during its time at Camp Thomas in Chickamauga Park, Georgia. There also a number of unidentified photographs, a newspaper clipping scrapbook, and research on the Spanish-American War.
The Pottstown Historical Society also keeps a comprehensive list of all local individuals who took part in World War II.

The 68th Regiment Pennsylvania Volunteers was recruited out of Philadelphia, Montgomery, and Chester Counties to take part in the United States Civil War. The field officers were Andrew H. Tippin, Colonel; A H. Reynolds, Lieutenant Colonel; and Thomas Hawksworth, Major. The regiment took part in multiple campaigns, including the Battle of Fredericksburg and Battle of Gettysburg.
One of the Pottstown volunteers for the Union Army was Captain Benjamin M. Guest for Company H. Guest mustered into service as a 1st Sergeant on August 25, 1862. He was promoted to 2nd Lieutenant on December 2, 1862; to 1st Lieutenant on August 20, 1863; and to Captain on December 25, 1863. Guest mustered out of service on June 9, 1865.
Several decades later, Pottstown residents again volunteered for service during the Spanish-American War. The Fourth Regiment Infantry, National Guard of Pennsylvania, Company M, was mustered on July 8, 1898. They were stationed at Camp Thomas in Chickamauga Park, Georgia until July 22nd.