It is very timely that our March program will be “The History of Political Parties in the US” presented by Patricia Norred Derr, Ph.D., Associate Professor of History at Kutztown University and a member of the Board of Directors of the Pottstown Historical Society. Patti is a highly regarded instructor in courses on American colonial history, religion, American popular culture, African American history, and historical methodology.  Patti is a transplanted Texan, who received her BA from the University of North Texas, and her Ph.D. in American History from the University of Missouri-Columbia. She was the recipient of a Fulbright Research Award and has participated in numerous public panels and programs.

It’s a perfect time to look back on the historical origins of political parties in the U.S. Where do political parties come from? Why do we have them? What is the difference between a party and a faction?  And what’s with those names?  We may not get to them all but to name a few:  Federalists, Jeffersonians, Jacksonians, Freedmen, Republicans, Democrats, Whigs, Libertarians, Free Soilers, Know-Nothings, Bourbons, Redeemers, Copperheads, and Bluedogs, Green Party.

Please join us for a very well-timed discussion and learn about this long-standing characteristic of American democracy.

Walking Tour- Planning for the 2017 Walking Tour has begun!  We will be touring the 200 block of High Street, between Hanover and Penn Sts.  This is a unique

block of High Street with great historical significance to many of the town’s prominent citizens. More details to come in the next newsletter, including date and time, and a call for volunteers.

A Note from Dave Kerns

I hope everyone enjoyed our January meeting at the Pottstown Public Library.  The interior renovations really showcase this wonderful, historical building and greatly upgraded the exterior, as well. On behalf of the Historical Society, I would like to thank Deb Penrod for planning the special event.  Thank you to our presenters, Sue Davis, Executive Director of the Pottstown Library, and Dick Frantz, a local architect. Everyone seemed to enjoy the tour of the building and the looking at the original blueprints of the building.

The steel ring of the anvil was at one time heard all through Pottstown, when horses and wagons were the modes of transportation. Our earliest smithy was at 254 High Street, over 200 years ago and it sat sideways to the street.  The building was razed by Henry Geist in the 1840’s.

Blacksmiths go back to medieval times and word originates from two sources.  The first pertains to the black fire scale, a layer of oxides that form on the surface of metals during the heating process and the second part possibly from the old English word “Smythe”, meaning “to strike”.

During the heating process, the smithy watched the glowing color of the metal for a bright yellow-orange hue which was the perfect time to strike.  A blacksmith’s forge was typically in a dim light area to be able to observe the color of the metal better.

Just as people needed shoes, so did the many horses and mules, back in the day.  The average cost of shoeing was $1.50 a set, depending on the type of horse and its use.  Blacksmiths also did all sorts of iron and metal repairs, as well as manufacturing of gates, railings, fencing, tools, etc.

In the 1800s and early 1900s, there were shops on Apple, Evans, York, Chestnut, and Beech Streets, just to name a few.  Some of the names were Bair, Rotes,

Rhoads.  The last smithy to close in Pottstown was Raymond Kalis’ shop in August 1954, after 51 years as a smithy.  Situated on York Street, between Beech and Walnut, it was a one-story frame structure with a dirt floor, which probably never saw a coat of paint.  Kalis apprenticed in the trade in 1903 and opened his own shop in 1913.

In the late 1930s, the business had slowed down when the dairies stopped using horses to make deliveries. Silas Stahl, the Sanatoga Antique dealer, bought the shop and moved it to his new trailer park for a utility house.

A renewed interest in the trade occurred in the late 1970s.  In 1973, the Artists Blacksmiths Association of North America was formed with 27 members. By 2013, the association was over 4000 members strong.

Today, as we visit various historical sites around the country, we again hear the sound of the hammer hitting the anvil to produce that metal item needed for repairs. 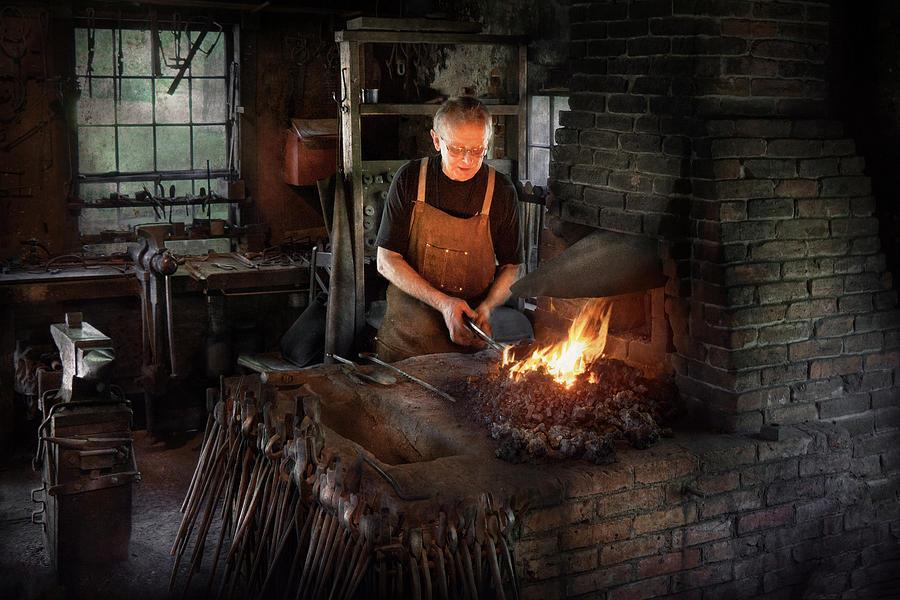