Our speaker for the evening will be Jack Beaver.  Jack taught school in Pottstown for 30 years.  He holds a BS in Education from Wagner College, in Staten Island, NY and an MS in Education from Penn State.  For the last 18 years, he has been the General Manager of the Pottstown Cemetery.  Jack will speak on the history of the cemetery and tell us about some of the more notable residents buried there.   The Pottstown Cemetery was chartered in 1854.  The first internment was John Hartranft in 1854.  The cemetery has been in service to Pottstown for over 150 years and is still an active, viable cemetery today;

A big thank you, Tom Hilton, for his wonderful gift of digitizing our archival photographs.  Thanks to Bob at Arrow Camera for digitizing these to disk for us.  And another thank you to Bob at Arrow for putting together a great picture of the Pottstown Band from the 1930s. 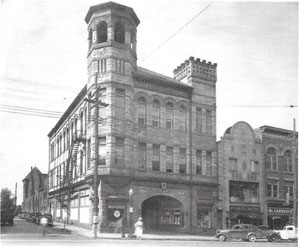 If you say to someone “Do you remember the Bahr Arcade”, they more than likely will start telling a story of the fabulous building which stood on the SW Corner of High & Charlotte Sts.  You walked into the Arcade and saw stores like Smith & Son, Barnas or McCarrachers.

When it was first built in 1904, it was called the  Auditorium Building.  The builders had purchased the Yost Mansion for $11,450 in 1900 and almost went bankrupt building the arcade.

The first part built was the back section or Market House and the stables across Charlotte St.  The financial problems of the builders caused the Arcade to be built in stages.  It was finally completed in 1904.  Further money problems caused the property to go to auction for debt.

Over the next 15 years, space was leased to a shirt factory and movie theater.  The 2  floor was used for dances and other affairs.  In 1919 the stables were converted to auto garages.  In March 1922, the sale of the property netted $145,000, which was the largest real estate deal in Pottstown to date.  It had been purchased by Robert Feroe, who converted the High Street frontage in an Arcade.   Feroe then sold the property to Harry Bahr, and hence the name change to Bahr Arcade.  Bahr died in 1931 after falling through the skylight of the building.

In 1973 the borough razed the building to make way for the municipal parking lot to attract more shoppers to the downtown area, unfortunately losing one of the prominent historical buildings in Pottstown.