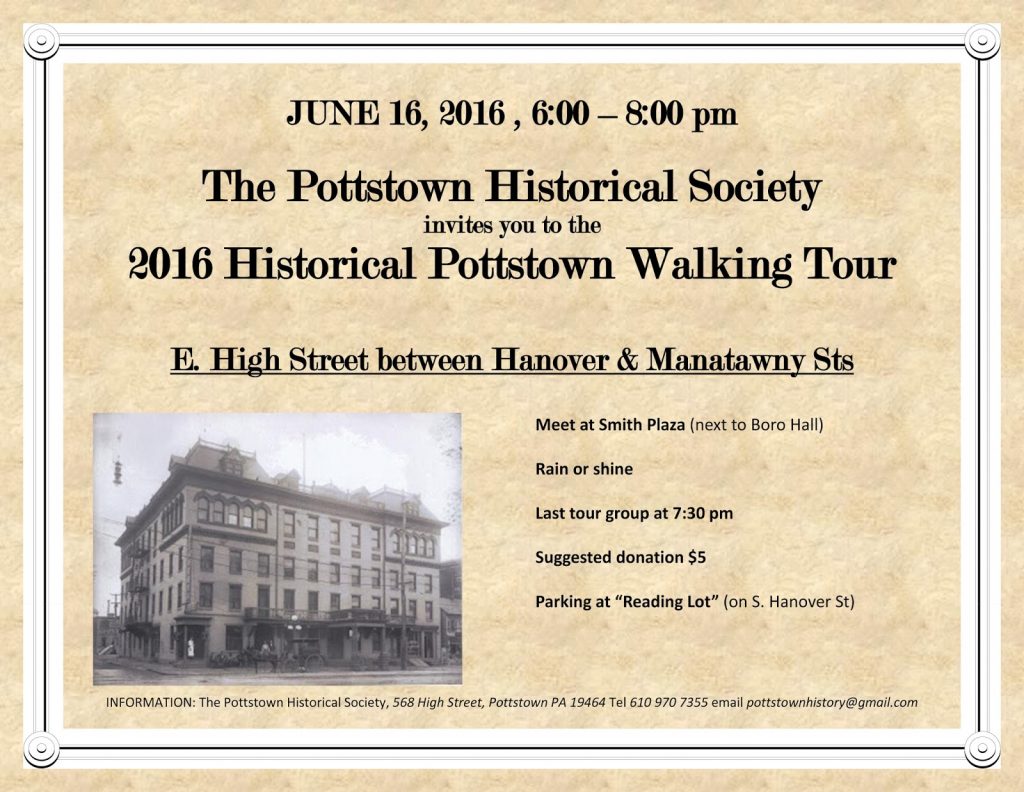 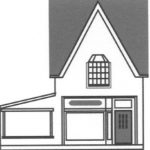 We hope you enjoyed our 2016 Walking Tour.   If you missed it, you can use the outline below to assist you as a self-guided tour to appreciate the long history of the area included in this short walk of Pottstown. The Tour started at the NW corner of High and N. Hanover Sts, then west along the north side of High St to Manatawny St, and back on the south-side. There were narrators at 11 stops who provided more information, many with a personal touch, to describe the site.

STOP # 1               NW corner of High & Hanover Street – 159 HIGH St, BB&T Bank     The original frame building on this corner was a residence & general store. In the 1860s, a 3-story brick building was erected in its place by John C Smith as a store and social hall. It became apartments with stores on the first floor. One of the stores in the 1940s and 50s was Wolf’s China and Glass, owned by the father of Jack Wolf, of the Wolf Baldwin law firm in Pottstown. Around the time of the building’s 100th anniversary, it was razed for the bank building now standing.

Looking to the left of the property, at the bank drive-through lanes, was another building also erected by John C Smith in 1860 as the first 4-story building in town. It was the Madison House Hotel, later known as the Commercial House, then also subsequently razed at about the age of 100 years.

In 1961, First Federal Bank was constructed on the properties stretching between Hanover, High & back to Buttonwood Alley. Typical of the time, the style was described as ‘modern’, which was later modified to remove an exterior lattice-work. Ownership of the bank has gone through several changes, including Susquehanna Bank until recently, and is now BB&T.

STOP # 2               from 145 HIGH St (Weitzenkorn’s) through 141, 139, 137, 135 & 133 HIGH St   The Weitzenkorn clothing store was the subject of many stories on the occasion of its recent 150th-anniversary.  The family business was started just a short distance away around the corner on Hanover when Abraham Lincoln was President. This building was built for them in 1877.  A fifth generation Weitzenkorn now works at the shop.

Several other buildings in this row began as frame buildings known as the “Rookeries”, which were then replaced by brick buildings beginning as early as 1877.  As an example, the original building at No. 133 was a frame structure, replaced by the brick building here in 1921. It was the Swedesboro Restaurant for 44 years until 1946, then Uptown Sports Shop, and more recently Jack O’Reilly’s Tuxedos from the 1970s until it closed in 2015.

The building at No. 117 with the beautiful brownstone-front was built in 1904 by Dr. Eck for his medical practice, replacing a previous brick building also used for medical offices. The building was re-named for Ralph E. Shaner & Sons Engineers, who occupied the building from 1946-2005.

No. 115 was built in 1911 as an early auto shop, the Reliance Garage. Hints of its origin can still be detected by several features, including remnants of garage-sized doors.  Beginning in about the 1950s, it served as a number of other businesses, notably several restaurants including Tuckers Tavern and Positively Pasta. Adam Burke now operates the lovely Lily’s Grill.

The matching brick buildings were built by Mrs. Van Buskirk beginning in 1883 to replace the original frame buildings. They have housed dozens of businesses over the years, including a tinsmith & stove dealer, cafes & taverns, grocers, furniture, paint, candies, jewelers, beauty shop, hats, photography, laundromat, drugstore, print shop, even the Capitol Trailways Bus Depot.  The Blade newspaper operated out of No.111. The building on the far left at No.105 is a close match, designed to conform to the look of the Van Buskirk units.

STOP #4                NE corner of High & York –  101 HIGH ST, Auchenbach Apts     In the 1700s, this location was a store and an Inn, known as “The Swan” or the “Sign of the Golden Swan”, which was the second Inn in town. The current Auchenbach building dating from 1910 was the height of fashionable apartments when it was built. The first-floor commercial unit originally held a series of grocery stores, then a sporting goods store, and now Philadelphia Ball and Bearings.

STOP #5                71 HIGH St,  “Isaac Fegely Mansion” and 61 HIGH St, the Elks   In the 1700s, a tavern stood at the NW corner of York. The grand old “Isaac Fegely” mansion now at No. 71  was built in 1868; it is in an unfortunate state of building code violation, and as of this date is not habitable. It most recently housed several apartments, and in the previous decades was home to physician offices. The Isaac Fagely name can still be seen in the wrought iron scrollwork on the gates.

The Elks Building at #61 is one of the classic images of Pottstown, another property with an entire history of its own. The first mansion on this site, dating to the 1700s, belonged to the Van Buskirk family, noted local family of physicians and businessmen. The property was sold in 1874 to Jacob Fegely, who operated the successful coal and hardware businesses on High St.  Fegely razed the building for a new house, finished in 1888, which was then purchased by the Elks in 1913.

STOP #6                NE Corner of HIGH and MANATAWNY, America’s Best Value Inn    The impressive Rittenhouse Mansion stood at this large corner property. The building then became home to the Owls Lodge. That building was destroyed in a fire in 1961, which injured 15 firemen. The Manatawny Motor Inn opened in 1965 as a “modern” motel, with the Candle Light Room Restaurant.  It later became the Downtown Motor Inn, other name changes followed, and what remains is a discount motel.

Crossing High Street to the south side

STOP #7                HIGH St and the Manatawny Creek –  MCCC and MCCC Parking Lot   The Red Lion Inn was already operating here along the Manatawny Creek when the town was laid out in 1752. It was torn down in the early 1870s. Later, in 1886, a brewery was built upon the foundations of the Red Lion Inn’s old Stables. The Brewery was forced to close for Prohibition in 1921, after which it was run as a wholesale grocery company until 1935. From 1946-1950, the Kleen Mattress Company utilized these old structures. Kiwi Shoe Polish was the final business from 1953-1979, before moving to Douglassville (Berks). By the 1980s, the buildings were demolished for parking.

In 1902, Pottstown Knitting Co, later Searles Knitting, purchased a lot to the left of the brewery to erect a factory. Vaughan Knitting purchased it in 1910, which with many renovations, continued to operate as knitting mill until mid-century.  A new owner used it as the Nittany warehouse, identified as an unsafe chemical storage site in the 1980s.  After the MCCC West Campus took up residence in Pottstown in 1985 on College Drive, this building underwent extensive renovation before re-opening in 2005 as the MCCC North Building.

STOP #8                18 – 22 HIGH St, Kiss Motorcycle    The Kiss family has operated a motorcycle business at this location since 1913. The office is in a house built about 1900, and if you visit to purchase your favorite motorcyclist a pair of gloves or helmet from the third generation Kiss family, you can see the modifications over the years. The garage, adjacent to the shop, was built in 1917 as an auto dealer and shop for Wm Young Ford Dealership, then at one time housing the Curtiss Pottstown Motors.

STOP #9 SW & SE Corners of HIGH & YORK – The Potts and Penn Diner and  Borough Hall    The Merchant’s Hotel, built on the SW corner on a field in 1846, stood until 1959. The property then became the site for a diner in 1962, originally Dempsey’s Diner and later other names and owners. The diner reopened in 2015 as the Potts & Penn Diner following considerable updating by the new owners, Manny and Elizabeth Vlastos.

The SE corner site with the Pottstown Police Department parking was the very early “Rising Sun” hotel, where George Washington was said to have stayed on his way to the Whiskey Rebellion in 1796.  By 1811, the hotel served as the Pottstown terminal for the stage coach to Philadelphia. Following demolition in the 1960s, the property became horse barns, feed stores, and eventually the Pottstown Police Department parking lot. The adjacent property to the east held the P&RRR Freight House and Freight Deport, stood vacant for many years, and eventually became Borough Hall.

STOP #10             Smith Plaza   Smith Plaza was the long-time site of hotels for over 200 years under series of owners, buildings, and modifications. A brick hotel, the Swann, was built by John Potts in the 1700s, which in turn became the Washington, and then the Farmer’s Hotel. By 1876, it had become the Schuler Hotel, which then operated until 1975.

At Smith Plaza, you are standing in what has now become the town center and part of the new Rec District, which includes greenway running through Pottstown all the way from the Schuylkill River Trail, along the surface roads or through the tunnel connecting South and North Buildings of Montgomery Community College, up to the Carousel and the Miniature Golf, then on to Memorial Park and the Colebrookdale Secret Valley Railroad beyond that.

STOP #11              152 HIGH St, The Security Trust Building   The impressive stone dwelling originally standing on this corner was built in 1770 by a member of the Potts family; it became known as the Jonas Smith House after Mr. Smith acquired it in 1842 and opened a store. It was razed for the current building, built in 1888, still known to this day as the Security Trust Building. For more than 125 years it has been one of the most notable and impressive buildings in Pottstown. It remains a vibrant and key piece of downtown Pottstown, hosting the Brick House owned by Dave Walsh on the main floor since 2005, as well as offices for Pottstown Health and Wellness Foundation, the TriCounty Chamber of Commerce, PAID, and law firms. Dozens of other businesses have been there in the past including a few in the basement.

It is fitting that the 2016 Tour concluded with a reception in the lobby of this building, courtesy of the current owners, Win & Sutida Somboonsong. Inspection of available office space and the scenic view from the upper floors was hosted that evening by Leasing Agent, Matt Green of Glocker Realty.

The 2016 Historic Pottstown Walking Tour is a labor of love by the members and volunteers of the Pottstown Historical Society. The Tour is intended to provide education & entertainment, as well as prompt general interest in the long history & ongoing changes in Pottstown. We welcome your membership and inquiries as well as helpful comments, additions or corrections.

A special thank-you goes to David Kerns, the Historian and President of the Pottstown Historical Society, who has contributed vast amounts of his time and expertise in researching the information. Thanks also to Clara Haas, our Librarian, and special thanks also to the original Chairs of the first Walking Tours, Peggy Whittaker and Sue Krause.